Optagethed is a series of sound and performance works (in Danish) that each portrays one person from the western part of Denmark. Through (binaural) sound recordings made together with the person and musical composition with the sounds we try to draw an emotional, rather than chronological, portrait of a completely normal person whos completely normal everyday sounds will be transformed electronically into music and soundscapes.

Each episode is launched with a live site-specific performance. The radio works are available as podcasts under the title 'OPTAGETHED'. 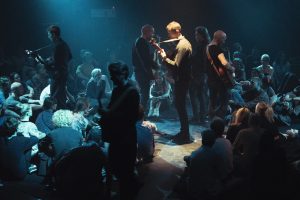 The choir MidtVest Pigekor and the guitar sextet Cirklen perform together in this acoustic work composed by Niels Bjerg and Anders Holst for Vestervig Kirke in 2020. 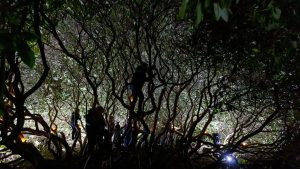 Vinterlys Festival commissioned this sound installation inside a huge cluster of Rhododendron trees.

Boaz Barkan has created a dance performance for kids which is performed right in their own class room by the fabulous Astrid Pauline Schmidt while they hear a 3D soundscape through headphones. Here's an exerpt:

‘Hvidt Sand, Vand og Asfalt’ [‘White Sand, Water and Asphalt’] features soprano Annemette Pødenphandt, a small choir and an orchestra of loudspeakers. The work is performed in a kind of super-surround sound format, where acoustic sounds blend with the speakers and are moved around the audience and very close in a choreography performed by the choir and singer. The work originates in the fishing village Hvide Sande, from where forklifts, seagulls and container ships forms an unmistakable soundscape.

In WE GO's 1 1/2 hour symphonic electronic concert and dance performance Dead Awake the dancers are wearing portable speakers which makes the sound mobile and gives it a body to move in space. You are surrounded by an orchestra of speakers and six dancers carrying the sound around and amongst the audience.

Performance artist Inge Agnete Tarpgaard and I made a sort of dance performance for six cars and their owners, being young mechanic students from the small town of Skjern in Denmark. The audience would experience the performance as passengers inside the cars. The music was playing out through the speakers in the cars while the chauffeurs would drive their cars in a tight choreography that would make the cars “dance” to the music with the audience inside. The performance took place on a big parking lot and the choreography also had a visual expression toward the outside audience and was filmed and will later become a video work by Ene Bissenbacker.

A site-specific work by the group Cirklen. Six guitarists make use of an entire building with both acoustic and electric instruments moving from the far corners of space to right next to the ear of the audience. The sound is choreographed in order to give the music a moving body of its own.

The concert is created especially for the legendary venue for contemporary dance in Copenhagen, Dansehallerne as part of the last event to take place in the building before it is torn down and the venue will relocate. Commissioned by Jazz Club Loco during Copenhagen Jazz Festival on July 13th 2017.

Home# is a series of three compositons (December 2016 - December 2017) created specifically for each one home. Niels Bjerg collects sounds together with the hosts from her or his home and everyday life and the sounds are turned into electronic music pieces.

The home is turned into a concert hall with 30 - 40 speakers, a so called acousmonium, and the music is diffused live by the composer. Home #1 and #2 took place in Copenhagen where Niels Bjerg performed along with fellow composers: Jørgen Teller, Jakob Riis, Maria Laurette Friis and Yann Coppier. Home #3 is commissioned by The Holstebro Festive Week, DK 10 - 18th of July and portraits residents at the asylum home of Holstebro.

“Blind” is an electro acoustic piece commissioned by Sparkling Sound Festival 2016 in Copenhagen. A revised outdoor version was presented by Aarhus Theatre on September 24th.

The piece was originally commissioned as a work of music, but composer Niels Bjerg and choreographer Kirstine Kyhl Andersen decided to try out a simple choreography on the piece using ideas from their ongoing research of spatializing music by dancers carrying portable speakers. The audience are seated in the middle while the choreography goes on around and amongst them.

When performed live “Blind” is a choreography that can be experienced without seeing. The title also refers to the composing proces where the composer has been “blindly” following the natural occurrences of musical objects such as melodies and rhythms found within field recordings as a basis of the composition.

Cirklen is a dancy live-surround-sound-installation consisting of six electric guitarists surrounding the audience on the dance floor. The absence of drums forces each guitarist into new roles on the instrument as melodic percussionists.

MUSIC FROM MOVEMENT - THE ALBUM

Update Required To play the media you will need to either update your browser to a recent version or update your Flash plugin.

Featuring the two fabulous bands KNALPOT (NL) and DOKTOR SCHNITT (NL) When we engaged in the co-production with Paradiso Melkweg Productiehuis in Amsterdam (NL) of the performance MUSIC FROM MOVEMENT they asked us to create a music album before the performance. Usually we develop the choreography and the music simultaneously in one coherent score and so we had never tried to begin with only the music. But we took is as a challenge and this is the result. Read more about THE ALBUM

Listen to the tracks here: 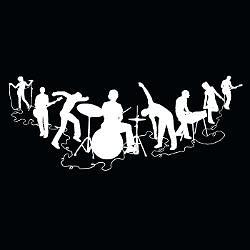 Update Required To play the media you will need to either update your browser to a recent version or update your Flash plugin.

It's not very normal nowadays for a band to wait seven years before releasing their first album, but WE GO is not an entirely normal band. They consist of four modern dancers and four musicians and they create a mix between concerts and dance performances. Since 2004 the full ensemble of WE GO has created four large concert performances and a repertoire of several hours of music. The album is both a debut and at the same time a compilation of selected tunes from the last seven years.
Read more about DEBUT / BEST OF 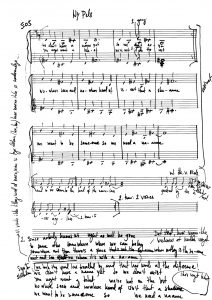 A trio with me and the beautiful singers Qarin Wikströmand Birgitte Lyregaard. 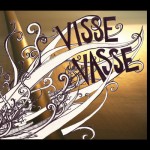 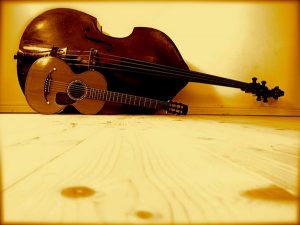 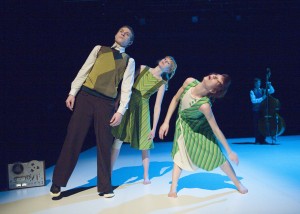